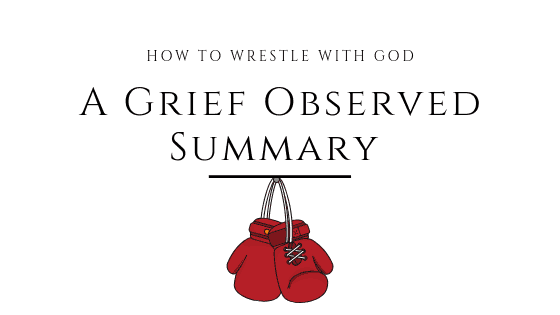 When C.S. Lewis penned A Grief Observed the premise was less propositional, less a philosophical exploration or academic explication of concepts and more a man’s wrestling match with God, a hip-out-of-joint memoir as it were.

There existed no clear trajectory, no intentional movement but a dysteleology of sorts, the realistic progression and regulation of human passion.

After all, Lewis wrote primarily to cope with the guilt yet, as with all emotional suffering, invariably penned a letter to God, a memo which lasted only as long as his notebooks did.

The premise which Lewis’s appears to grapple with can be summed up in his own words,

“My idea of God is not a divine idea. It has to be shattered time after time. He shatters it Himself. He is the great iconoclast. Could we not almost say that this shattering is one of the marks of his presence? The incarnation is the supreme example; it leaves all previous ideas of the Messiah in ruins. And most are ‘offended’ by the iconoclasm, and blessed are those who are not. But the same thing happens in our private prayers.” (p. 77-78)

The book records this shattering process. I will provide a simple outline of the four brief chapters and attempt to highlight the progression through my analysis of the text.

In his darkest hour, Lewis notes, “Where is God…go to Him when your need is desperate, when all other help is in vain, and what do you find? A door slammed in your face, and a sound of bolting and double bolting on the inside. After that, silence.” The prima facie evidence suggests Lewis is not here doubting the existence of God but instead is doubting His goodness. He continues, “Not that I am (I think) in much danger of ceasing to believe in God. The real danger is of coming to believe such dreadful things about Him. The conclusion I dread is not ‘So there’s no God after all,’ but ‘So this is what God’s really like. Deceive yourself no longer.’” (p18)

He draws these conclusions not from theological speculation but from unbearable emotional pain. His argument is not an intellectual one but an emotive one.

Lewis is not really saying that God is evil, what he is really saying is, “I cannot take this much longer, sure I’ve understood death intellectually, but for this, I was not yet ready, why me!”

Thus, his grief precipitates not a lack of belief but a new belief, that of the Cosmic Sadist. Regarding beliefs specifically, Lewis notes,

“You never know how much you really believe anything until its truth or falsehood becomes a matter of life and death to you. It is easy to say you believe a rope to be strong and sound as long as you are merely using it to cord a box…Only a real risk tests their reality of faith – I thought it faith – which enables me to pray for the other dead has seemed strong only because I have never really cared, not desperately, whether they existed. Yet I thought I did.” (p. 33-34)

Two doctrines, in particular, caught me off guard with C.S. Lewis’s writing. First, the doctrine of the conditional salvation – Lewis appeared to subscribe to the teaching that salvation is still an option after death thereby adhering to some form of purgatory. Moreover, he also seemed to advocate for praying to the dead, which is not controversial but I still view which suspicion.

It becomes obvious, however, that these views also appear to be tethered to his grief. In an attempt to keep things as they were, he seems willing to adhere to views which can actualize them – but does appear to do so apprehensively.

Are we not all guilty of this?

As suggested in the above quotation, it seems these doctrines and the basic schematics of his religious beliefs are coming to light.

He concludes in a fit of rage that God is simply a bad God. However, he quickly argues against this by mentioning this belief is far too anthropomorphic and leaves little room for mystery, which would indubitably exist if an eternal, incomprehensible Being existed. Lewis even suggests the darkness he sees in this bad God, “unreasonableness, vanity, vindictiveness, injustice, and cruelty” are simply reflections of himself – of mankind. (p.43)

Lewis begins this section defending God, though no less hurt he is cleaning serious insight. He writes,

“The terrible thing is that a perfectly good God is in this matter hardly less formidable than a Cosmic Sadist. The more we believe that God hurts only to heal, the less we can believe that there is any use in begging for tenderness. A cruel man might be bribed—might grow tired of his vile sport—might have a temporary fit of mercy, as alcoholics have fits of sobriety. But suppose that what you are up against is a surgeon whose intentions are wholly good. The kinder and more conscientious he is, the more inexorably he will go on cutting. If he yielded to your entreaties, if he stopped before the operation was complete, all the pain up to that point would have been useless. But is it credible that such extremities of torture should be necessary for us? Well, take your choice. The tortures occur. If they are unnecessary, then there is no God or a bad one. If there is a good God, then these tortures are necessary. For no even moderately good Being could possibly inflict or permit them if they weren’t.” (p. 54)

The Mystery Behind The Door

By the tail end of the book, Lewis argues for God’s goodness, or perhaps lack thereof. He comes dangerously close to agnosticism or, perhaps more accurately a Barthian transcendence. He comments,

“When I lay these questions before God I get no answer. But a rather special sort of ‘No answer.’ It is not the locked door. It is more like a silent, certainly not uncompassionate, gaze. As though He shook His head not in refusal but waiving the question. Like, ‘Peace, child; you don’t understand.’ Can a mortal ask questions which God finds unanswerable? Quite easily, I should think. All nonsense questions are unanswerable. How many hours are there in a mile? Is yellow square or round? Probably half the questions we ask—half our great theological and metaphysical problems—are like that.” (p. 81)

He, therefore, appeals to religious experience as a defense for God’s goodness but posit that His goodness, His nature, is ultimately so other than that a mere creature could not possibly understand.

A Grief Observed is a fascinating account of one man’s dealing with loss, with consummate grief and pain. As with all grief, he grapples with his faith, his doubts, and his regrets. This record is a wonderful piece for learning to deal with the religious problem of evil.

I struggled to identify with the depths of his sorrow but it did give me the perspective I otherwise could not have comprehended. Though some of the doctrine he proposes his skeptical, the strengths far outweigh the weaknesses, if but for anything, to see that the grieving need space to wrestle with God and simply support through this process.

Contents1 So What’s The Greatest Question Ever!2 The Broad & Narrow Road 3 1.) In light of your past experience, what is the wise thing …