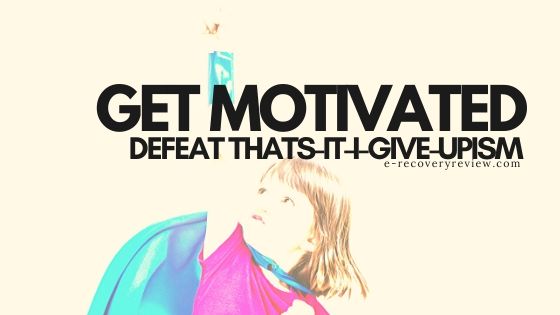 I Have No Motivation

Avoidance techniques are 100% my strong suit. Give me a solid reason to do something and I can quickly spit out 5 rational and cogent reasons why I shouldn’t.

It’s a sickness – and it’s potent. I call the avoidance committee in my head “Thats-It-I-Give-Upism.”

Well, I’ve used my greatest power against myself and formulated 3 robust methods to overcoming internal resistance. This is how I stay motivated.

Friedrich Nietzsche once remarked, “He who has a why to live can bear almost any how.”

This holds true to our work as well. Certainly being a workaholic is not what I am suggesting, but to create a schedule, to stick to it, to be disciplined, and to satisfy personal and vocational goals takes a lot of sweat, a lot of emotional push back, and an overwhelming share of gusto.

Plug in a few ‘whys’ of our own, print them out and hang them above your computer or wherever is visible while you work. I call them Manifest Motivators.

2. The Thick of Thin Things

I read this quote in one of Steven Covey’s books – I think it was the 7 Habits Of Highly Effective People. He reiterated the words of Thomas S. Monson: “We become so caught up in the busyness of our lives. Were we to step back, however, and take a good look at what we’re doing, we may find that we have immersed ourselves in the ‘thick of thin things.’ In other words, too often we spend most of our time taking care of the things which do not really matter much at all in the grand scheme of things, neglecting those more important causes”

It’s odd how much time we spend preoccupied with trivial details and events. We are trained to think this way, probably has some adaptive value to avoid future snares, etc. However, this primitive mindset should be appreciated but also needs to be benched.

I once read a meme that stated, “I have 99 problems and 86 of them are completely made up scenarios in my head.” Sound familiar?

So how do we avoid the ‘thick of thin things?’

Practice mindfulness meditation 10 minutes each morning prior to the workday. And if need be, a few times throughout the day. Sometimes one needs to disconnect for optimal engagement. Like the old TV’s that needed to be unplugged every once in a while to function correctly….yup, we are like that old TV.

My dog loves to sit when I request it of her. She gets overexcited – to the point where it’s frightening. Why? Because I’ve programmed her to experience sitting as its own reward. The enthusiasm is overflowing as she anticipates what good will come next; that’s the nature of repeat (sit command) and reward (small training treat). It’s not her, it’s her system; I simply hijacked it and reprogrammed it per my needs.

That sounds odd but that’s an accurate statement.

Well, I’m not calling you a dog per se, but you too have a system which can be infiltrated for optimal functioning. And it’s that simple – follow through with a goal and give yourself an honest reward, then repeat the process.

For example, after the week’s tasks are accomplished you could easily reward yourself with a movie night preceded by your favorite dish. Certainly, this is a reward and will assist in the repetition of the behavior which created it.

But when you’re really under that dark emotional cloud and you’re seemingly incapable of comprehending the motivation conundrum, will that still work?

Sounds bizarre, particularly the notion that the very concept has left in its wake thousands if not millions of dead cats.

However, if behavior and it’s accompanying parallel thought processes are driven by impulse – automatic habits – then what could lift one out of their skins more than mere curiosity? Brewer noted during his Ted Talk,

“When we get curious, we step out of our old, fear-based reactive habit patterns. We become this inner scientist where we’re eagerly awaiting that next data point.”

So, what’s the recommendation? Explore the ominous dark cloud, don’t avoid it or impulsively react to it, just sport your Indiana Jones hat (if you don’t own one you can purchase it on Amazon) and dance with the discomfort – become curious as to what you are really experiencing (thoughts, sensations, craving, etc.) and it – the habitual response – will take on a new direction.

The reward of adding something new to your system changes it completely!

How? Well, for reliance on your the old programming, your brain is dependent upon the old system remaining entirely unchanged and intact. But it no longer is, you’ve introduced a new variable – you got curious.

Don’t let the Thats-It-I-Give-Upism win. Sure, it will most definitely feel at times like gut-wrenching-impending-doomism; but endure. On the other side of the crucible is a new dimension of existence.

Now go tear that damn veil in two!  I know, me and my religious references – whatever, it’s basically synonymous with Jim Morrison saying “Break on through to the other side!”

Contents1 Schemas, Life Recovery, And More…2 It Started With Abductive Reasoning3 What Does This Have To Do With Anything?!?4 How The Theory-Validation Schema Informs …

Contents1 What Is Surrender? Drop Your Addiction, Pick Up Your Recovery2 Two Minds, Two Options3 The Day A Stranger Changed My Life4 Sometimes We …