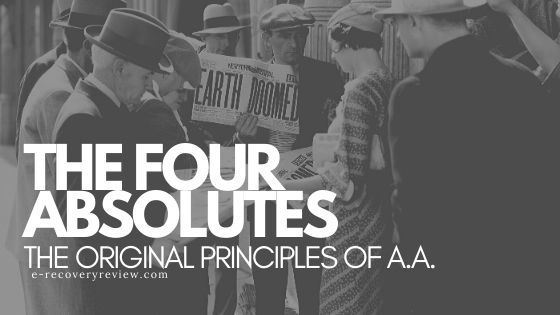 The Constancy Of Principles

In this day and age of fictions, a fixity in a transcendent sense appears not only naive but unwelcome. Oddly enough, when equal yet competing truth claims coexist the idea of absolutes causes unease; precipitating even hatred and violence.

The abounding western narrative presents relativity absolutely… ironically vitiating its own position in every conceivable way.

Yet, absolutes must exist.

(Don’t fret, this segue is necessary for an adequate e-Recovery introduction to The Four Absolutes)

The Absolute Nature Of The Mental: Logic

Matt Slick, a Christian Apologist, commented on the transcendent nature of logic. He notes,

“ We cannot have rational discussion if there are no logical absolutes anymore than we can construct a building without a foundation. If there are no logical absolutes, then our thinking would have no basis of consistency and would not reflect truth and/or reality…without a standard of rationality, we cannot expose what is irrational. Whether or not someone tried recognizes this presupposition is irrelevant to the fact that the foundation of rationality is built upon absolute truth and logical absolutes – not seeing the foundation of a building does not mean it isn’t there.” (1)

Therefore, the foundation of all coherent thought is governed by absolutes. It stands to reason, the same can be true in a certain sense regarding behavior or what some would call “morality.”

The Absolute Nature Of The Behavioral: Principles

One author, discussing Stephen Covey’s [The 7 Habits of Highly Effective People] take on these types of absolutes (which Covey terms principles) correctly asserts,

“For Covey, principles are self-evident and—as part of most traditions and philosophies over the ages—they’ve been woven into the fabric of societies throughout human history. They often concern human behavior and govern interactions between people.

Principles represent an objective reality that transcends cultures and individuals. For example, Covey cites various principles, including fairness, integrity, and honesty. He declared, ‘A principle is a natural law like gravity. If you drop something, gravity controls. If I don’t tell you the truth, you won’t trust me; that’s a natural law.’

There are certain principles that transcend cultural differences and do not change over time. They determine the ultimate outcomes or consequences of behavior and actions, as much as gravity determines that something will fall when dropped” (3)

I recall thinking that this world is always in flux, the only constant is change, and that more than anything my mental state was indicative of this incessant stream of cognitive chaos.

Yet, as stated above, there are particular absolutes that exist – logic and principles – which do not bend or break, they remain anchored and constant. And this constancy, I soon discovered, is a necessary ingredient to emotional security.

Principles by nature are structured, that is, they flourish in routine and discipline. Very much like laws, when one thinks of a law immediately order comes to mind and with order stability and with stability refuge.

Moreover, this constancy creates security simply because of the fact that it becomes a predictable element throughout one’s day.  The less guesswork, the less fear, and the less fear, the more the security.

Worry tends to stem from lack, and lack is an imposed category from an unstructured or unordered mind.

Namely, without the constancy of principles, without rational internal laws, the mind becomes preoccupied with a constancy just out of reach – therefore, the lack is merely starvation for constancy.

It doesn’t take a stretch of the imagination to conclude human beings ultimately long for security, stability, and safety. Whether positive or negative, thus is the nature of habits.

How To Ground Habits On Universal Principles

Let us take a ride through history to the Oxford Group – an organization which was more or less the grassroots squad that would later become Alcoholics Anonymous.

Well maybe that’s overly simplistic, but it will suffice to say A.A. borrowed their program to such a degree that, at least in terms of the program of action, they are one and the same.

Yet, one element of the Oxford Group system A.A. failed to adopt was The Four Standards, and frankly, this may be their biggest shortcoming.

A Revival Of The Four Absolutes

Originally published in American theologian Dr. Robert Speer’s book The Principles Of Jesus, the four principles he declared were directly from Christ’s teachings.

Per Speer, this renders them universal and uncompromising moral standards by which one could base the decisions of their life.

Dr. Bob, the co-founder of A.A., referred to them as yardsticks in which to gauge God’s will versus self-will.

The term absolutes were coined in later years by a Yale theologian who continued Speer’s research and many preferred that term since it captured the perfect standard of God.

Others thought, particularly Bill W. Co-founder of A.A., that they were a bit hard to swallow.

Nonetheless, the standards were a crucial component of the Oxford Group and the subsequent fledgling A.A. fellowship in Akron. They are as follows:

“Oxford Group people often made lists using the Four Absolutes as moral standards. They would write down the four standards. Then they would write down where they had fallen short of these standards. Then they would confess the shortcomings to another and go about forsaking the behavior, changing themselves, and making restitution for harms done-all based on surrendering their lives to God and receiving His guidance from the Bible, the Standards, prayer, listening to His Voice, and talking to each other.” (4)

Now I’m not attempting to persuade you to read the Bible, I’m attempting to argue for the constancy of principles as that which brings security and predictability to life change.

The Bridge Of Principles

Picture a bridge spanning across a massive and dark canyon.

One side of the bridge is the predictable nature of what one knows. The ground is familiar and thus safe.

On the other side of the bridge is the knowledge of something different. This is still predictable, familiar and safe because it’s merely conceptual and the feet are still planted in what one knows.

The gap – the canyon – represents the action which must be taken to convert knowledge of something different to something new, namely produce life change. The gap is, therefore, uncharted waters. It’s unfamiliar. It’s unpredictable. It’s not safe, not secure. The feet must leave the fertile soil of what is known.

Unfortunately, most folks do not experience the life change because the fear becomes too strong, the resistance too great, they usually fall headlong into the pit.

The human mind cannot last very long under unpredictable conditions, it needs an anchor to keep the vessel from drifting.

So what gets us across the gorge? As I’ve been alluding to the entire article, the constancy of principles can provide the necessary predictability, security, and safety to confidently span the gap.

How Principles Bridge The Gap

What makes principles so predictable? I think it’s fairly evident but let me give an illustration to drive home the point.

The human body is, just like everything else, governed by certain principles. One of those principles requires the human body to remain at a temperature between 97.7–99.5 °F.

Too hot or too cold can be a  severe health risk, and if one strays too far from the mark death is certain.

However, if in frigid temperatures, for instance, one bundles up in multiple layers of clothing, the cold does not seem too intimating, granted it’s not too cold, because the insulation helps maintain proper body temperature

Furthermore, the principle informs the rational mind to avoid temperatures which are excessively hot or cold, so the predicament should not exist in the first place, that is, the principle bridge would not carry you to that destination.

The principle requires the body do what it must to maintain adequate body temperature.

In this way, one can be comforted knowing that principles will never mislead nor fail to administer precisely what one needs.

This does not necessitate one must “feel good” all of the time – that’s the nature of addiction, not principles. Instead, it guarantees predictability by handling a lot of the footwork and predetermining courses of action.

Ultimately, it’s becoming open to one’s limitations and choosing to live by them. A fish is limited to water, but this restriction grants him maximum freedom. In like fashion, principles afford us the same luxury – freedom using the right restrictions.

Sure, you can abandon principles and in your unrestricted freedom jump head first into a fire, however, that will be your last free choice. Every principle provides benefits and consequences.

One would be wise not to ignore their stipulations.

If a decision does not correspond with principles then don’t do it. It’s that simple. Well, simple in theory; excruciating in the application. The storms which tempt the will shall never cease in variety. Allow the constancy of principles to be your fortress.

(Read my article about Back To Basics – a workbook which demonstrates how AA worked the steps in the early days…the 4 absolutes were a crucial component!)

Contents1 Addiction: It’s Not A Disease Because You’re An Asshole2 What Is The Role of Morality in Scientific Diagnosis?3 Is Morality Objective or Subjective? …

I always found IQ tests a bit underwhelming. In the movie Interstellar the main character Cooper, played by Matthew McConaughey, was informed that his …

Nietzsche And The Lion So, you’re going through a steady, low bottom depression. The chronic malcontent produces a constant throb like a poolside horsefly.  …