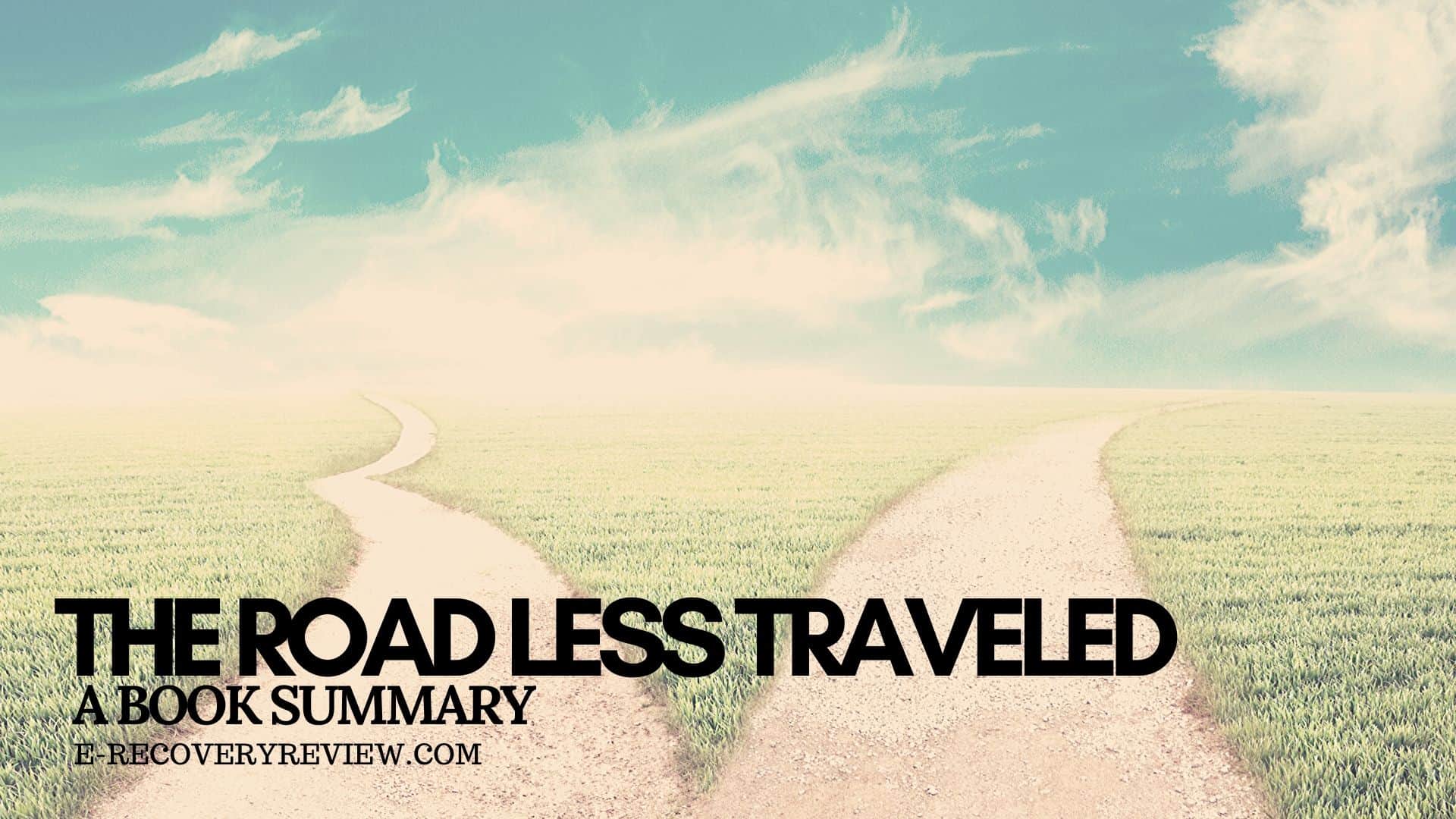 “What are these tools, these techniques of suffering, these means of experiencing the pain of problems constructively that I call discipline? There are four: delaying of gratification, acceptance of responsibility, dedication to truth, and balancing.”

Peck doesn’t pull his punches, nor does he hedge his bets. Right out of the gate he is real, raw, and uncut.

It’s worth mentioning at the onset of this book summary how upfront Peck really is in The Road Less Traveled.

It immediately testifies to his realist mentality.

The very first sentence being, “Life is difficult.”

What a breath of fresh air!

No attempt to convince us that problems are illusory or that pain is simply a dysfunctional relationship with the present moment.

No exhaling of the negative.

Instead here is a man confident in one thing: that with the pain of hard work, success and comfort can be experienced. Common sense, I know.

I don’t think anyone seriously doubts this. A problem, by its very nature, represents discord or tension. Think Apollo 13 launching to the dark side of the moon. The astronauts are trained, enthusiastic, and ready for business. Then all of sudden, “Houston, we have a problem.” This was painful. This was suffering.

Problems are always difficult. The difficulty varies in degrees, from mildly annoying to radically life-changing as the example above. But problems cannot be escaped. They can only be confronted. Thus, in a manner of speaking, the path to peace is what I like to term suffer-intentionality. Peck refers to these disciplines as “techniques of suffering.” So appealing, right?

The Four Principles of Suffer-Intentionality

In this article, I intend to cover the first two disciplines: delaying gratification and acceptance of responsibility, respectively. However, in part two of this series, the latter two will be discussed.

One word that consumers hate: dissatisfaction. Not only do we hate being dissatisfied, but we live to gratify our every waking appetite. Furthermore, this isn’t done in a calculated or strategic manner. Instead, it’s often at the mercy of our impulses. Our mantra? Feel and react. Feel and react.

How do we break the cycle?
We practice pausing.
How do we become effective?
We make pausing a habit
How do we optimize our experience?
We couple the pause with an evaluation.

As stated above, our first choice – that is, our initial impulse – is suspect at best. It’s worth running it through a quick analysis, a pre-screening as it were, to make sure our operating system continues to be user-friendly and optimized. It’s sort of a no-brainer, you use your brain…

Anywho, this process is uncomfortable. It is wise to get used to this place – discomfort is an ally. Befriend it and you’ll see less of it. It’s like the friend everyone has that disappears the minute he or she gets romantically involved elsewhere. Befriend your emotional pain and she usually isn’t interested in sticking around. She thrives off not being wanted. Delaying gratification triggers this confrontation so we can get on with our day.

I Hate Doing The Dishes

I recall a Saturday when my better half, right before she departed for work, requested I do the dishes. Nothing less, nothing more. A very reasonable request indeed. But holy crap, the mental anguish. I know, pathetic. There are just a million things I desired to do and not even a fraction of it was the dishes.

So, I did what any intelligent individual would do: nothing. I put it off for later. I figured I’d play some guitar, read a few chapters (who doesn’t love a good novel?), maybe watch a show, eat some grub, and then get to the obstacle at hand. But guess what happened? Or better yet, guess what didn’t happen? Yup, you got it. The dishes. And truthfully, it brought me great distress throughout the day. Not necessarily unbearable pain, but that gnawing feeling that something wasn’t right which limited actually experiencing the gratification of the present moment.

However, if I just quickly befriended my mental discomfort and did the dishes first, I could have optimized my experience and gratification. This is the principle. Delay doing what you believe brings you comfort. First, embrace your discomfort, then you may truly be comforted.

Peck tells this wonderfully instructive story in Greek Mythology which majestically captures the principle he is trying to convey.

The Myth of Orestes and the Furies

“Orestes was the grandson of Atreus, a man who had viciously attempted to prove himself more powerful than the gods. Because of his crime against them, the gods punished Atreus by placing a curse upon all his descendants. As part of the enactment of this curse upon the House of Atreus, Orestes’ mother, Clytemnestra murdered his father and her husband, Agamemnon. This crime in turn brought down the curse upon Orestes’ head, because by the Greek code of honour a son was obliged, above all else, to slay his father’s murderer. Yet the greatest sin a Greek could commit was the sin of matricide (killing one’s mother). Orestes agonised over his dilemma. Finally he did what he seemingly had to do and killed his mother. For this sin the gods then punished Orestes by visiting upon him the Furies, three ghastly harpies who could be seen and heard only by him and who tormented him night and day with their cackling criticism and frightening appearance.

Pursued wherever he went by the Furies, Orestes wandered about the land seeking to atone for his crime. After many years of lonely reflection and self-abrogation Orestes requested the gods relieve him of the curse on the House of Atreus and its visitations upon him through the Furies, stating his belief that he had succeeded in atoning for the murder of his mother. A trial was held by the gods. Speaking in Orestes defense, Apollo argued that he had engineered the whole situation that had placed Orestes in the position in which he had no choice but to kill his mother, and therefore Orestes really could not be held responsible.

At this point Orestes jumped up and contradicted his own defender, stating “It was I, not Apollo, that murdered my mother!” The gods were amazed. Never before had a member of the House of Atreus assumed such total responsibility for himself and not blamed the gods. Eventually the gods decided the trial in Orestes’ favour, and not only relieved him of the curse upon the House of Atreus but also transformed the Furies into the Eumenides, loving spirits who through their wise counsel enabled Orestes to obtain continuing good fortune.”

Claiming Responsibility Is The Great Neutralizer

What does it appear our predecessors were seeking to communicate to us? What principle were they attempting to convey? Could it be the key to mental health?

Epictetus summed up the sentiment wonderfully when he declared in his discourses, “For nothing outside my reasoned choice can hinder or harm it—My reasoned choice alone can do this to itself. If we would lean this way whenever we fail, and would blame only ourselves and remember that nothing but opinion is the cause of a troubled mind and uneasiness, then by God, I swear we would be making progress.”

It’s what psychologists would call the locus of control. Richard B. Joelson in an article in Psychology Today titled “Locus of Control: How do we determine our successes and failures?” thrusts Epictetus thought into contemporary understanding. He writes,

You Will Fail. You Will Drop The Ball. It Will Be Uncomfortable. That’s Ok.

Being wrong is awful. Nobody wants to admit it. However, to simply rationalize the wrong or externalize it, only compounds an already spiraling painful issue. Ok, so I didn’t do the dishes. I procrastinated and was lazy. I tried to avoid the discomfort but I couldn’t. And now, I have a double dose of it. So, should I place blame and receive a triple dose? No, that would be the height of folly. Instead, I should admit my fault, claim responsibility for my discomfort, not seek to find a reason for it outside of myself. I must befriend it, dance with it, and allow it to run its course. This is called moral duty. It’s inescapable. The Eumenides awaits.

Contents1 Disclaimer: This Review Will Most Likely Evolve2 What Does The Historical Record Emphasize3 The Beginning – Transcription (Inner Dictation)4 Doctrinally The Course Can …